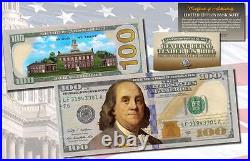 2013 1st Issue Release – New Design. Amazingly, the artists of the Merrick Mint have used advanced technology to enhance the collectibility of this uncirculated currency. Applied to the face of Benjamin Franklin (front side) and to the Independence Hall (back side), vivid color of the original art is restored and this magnificent work of art is brought to life. Due to the painstaking colorization process, only a limited number of these bills are currently available. This is by far the nicest and most pristine bills I have come across. Using specialized advanced technology, the Merrick Mint has enhanced both sides in full-color, creating a collectible work of art. Each bill comes displayed in a clear acrylic holder which is viewable on both sides and a certificate of authenticity is included. Certificate of Authenticity included from the MERRICK MINT. 8, 2013 Yes, you read the series designation correctly, 2009A. A spokesperson for the Federal Reserve Board said the decision to add the letter A after the series year date on some of the new notes recognizes the gap in production between the time the design was approved in 2009 and the time the first notes were released. The 2009A series designation was unexpected. All educational materials reflect Series 2009, because those materials were approved and printed long before production delays surfaced at the Bureau of Engraving and Printing. After the notes are inspected, officials will determine how many of the notes will be approved for release into circulation. Most of the 2009 notes sitting in vaults were printed before detection of a creasing problem related to the blue security ribbon visible on the face that led to a delay in the release of the notes, originally scheduled for February 2011. When the note is tilted back and forth the tiny images of a Liberty Bell and small numeral 100s printed on the blue ribbon appear to move. The windowed thread has 650,000 tiny glass domes, called micro lenses, crammed into the thread. These micro lenses act as magnifiers for the microprinted images on the thread. The watermark is a faintimage of the portrait of Franklin in the blank space on the right end of the face of the note, also visible to the left on the back. Color-shifting ink isused to print a Liberty Bell and a large numeral 100 on the face of the note. When the note is tilted, the color-shifting ink makes the bell and the large numeral 100 appear to change color from green to copper. The narrow securitythread running vertically to the left of Franklin’s portrait can be seen from both sides of the note when held up to a light. The thread is imprinted with the letters USA and the numeral 100 in an alternating pattern. The thread glows pink when placed under ultraviolet light. Microprinting appears onFranklin’s jacket collar in the main portrait, around the blank space containing the watermark portrait, along the new golden quill and in other spots. Franklin’s rightshoulder feels rough to the touch due to the enhanced intaglio printing process used to create the image. The facsimile signaturesof former Treasury Secretary Timothy F. Treasurer Rosa Gumataotao Rios appear stacked to the left on the face of the note. Please note that these bills are GENUINE. Our price is a. This item is in the category “Coins & Paper Money\Paper Money: US\Large Size Notes\United States Notes”. The seller is “poloblade” and is located in this country: US. This item can be shipped worldwide.